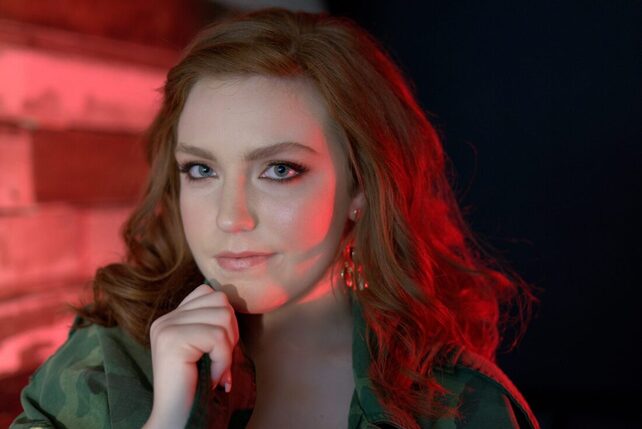 ​Danielle is an award winning Christian pop artist  / songwriter who uses the emotional power behind her songs to touch her audience.  Danielle can be quoted as saying “The best part of music is when someone listens to and relates to your song. In the few minutes that they are listening to the song, not only do they become part of my story, but I become part of theirs and that is an awesome feeling.”

Danielle’s connection to her audience has earned her several award nominations. In July 2018 her video for her song Breath won best video in the Gospel Category at the Carolina Music Video Awards. Danielle was also a final nominee for 2018 Nashville Universe Awards for Christian Artist of the year, final nominee for Rising Start of the Year for the Josie Music Awards and won 2017 The Akademia Awards for Gospel / Christian Artist of the Year. Danielle’s song Breath also won the Akademia Gospel / Christian song of the month for June 2018.

At 16 years old Danielle co-wrote and recorded her first song “New Day” which is about forgiveness, moving forward, leaving the past behind and starting over. Everyone makes mistakes or find themselves in circumstances that could not have been predicted at some point in life. In “New Day” Danielle wanted to make sure people understood that there are times when one small moment can be pivotal in our lives, so when that happens it is possible to take the steps that are needed to keep moving forward in the right direction. From every challenge comes a lesson. In Danielle’s words “I have lived my life holding myself to my mistakes while living with no regrets, because I believe that everything, including our mistakes, lead us to where God wants us to be. New Day goes deeper than merely a new day, for me it was about a new day that led to a new life. God gives us endless opportunities to change and find our way back to Him.”

The inspiration for Danielle’s second song “Forget” came from Danielle’s grandfather. Her grandfather inspired her to see the bigger picture about God not forgetting us, which is the concept she wanted for “Forget”. While growing up, Danielle visited her grandparents daily. Using love, laughter, loyalty, work ethics and faith they taught her some of the most important lessons in life. For the last six years of her grandfather’s life, her family watched him slowly change due to Alzheimer’s disease. Danielle describes him as the best man she has ever met, the person who understood her best and the person she aspires to be like.  At the time Forget was written she was scheduled to be in Nashville for a photo-shoot, to co-write her second song and do the video for “New Day”. Originally she had a completely different plan for her second song; however, just as she arrived in Nashville she received a call that her grandfather had fallen and had a brain bleed. Danielle flew back home to find him hospitalized. She was told not to expect much and that he would likely pass away in a few weeks. During his entire time with Alzheimer’s Danielle was the only person he consistently recognized. He never got her name wrong once. As she flew home Danielle remembers being so afraid he would forget who she was before she arrived; however, when she went over to his bedside and said “Pepere”, he immediately replied “Danielle you’re here.” He still knew her name. When Danielle returned to Nashville and met with her co-writer / producer they discussed her situation and her fear of being forgotten and “Forget” was composed.  Danielle said that her initial reaction was to question her faith, because she could not fathom why God would pull her grandfather away from her and her family. As she began thinking about how extremely blessed she was that, even with a brain bleed, he still recognized her, she suddenly had this overwhelming feeling of love along with the sudden realization that her grandfather had not forgotten her and neither had God. That’s why the main message of “Forget” to is even when we feel forgotten we should know that God is still with us. Forget was released in March 2016 and went all the way to #2 on the Top 40 International Christian Music in English the week of July 17, 2017 (GT) (IECR).
​
Like “Forget”, the lyrics for “Always With You” come from a  very personal place for Danielle that certainly create emotions, bring about awareness and entertain.  “Always With You” is dedicated to Danielle’s grandmother. Danielle describes her grandmother as the person who not only let her jump in the puddles after it rained, she encouraged it. She loved life and made endless efforts to continually connect with her family, particularly her grandchildren. Her grandmother over came her obstacles by emphasizing humor, acceptance and kindness. Danielle aspires to be like her grandmother by using the “golden rule” of treating others with kindness, respect and the way you want to be treated. Danielle knows from experience that one small act of kindness can make a difference. Since her grandmother meant so much, as soon as she was diagnosed, Danielle knew the concept for her next song. A week before her grandmother was diagnosed with cancer, Danielle was in Quebec. Since her grandmother wasn’t feeling well, she had asked Danielle to go to a church and light a candle for her. In a store across the street from this church, Danielle bought her grandmother a stone with an angel on one side and the saying “Toujours Avec Toi” (Always With You) on the other side. A few days after Danielle gave the medal to her grandmother, she found out she had cancer. All of the sudden, the saying on that medal took on a whole new meaning. Danielle and her grandmother had many conversations about how she believed she would, in ways, always be with her and the rest of the family. She talked about her fears and her religious beliefs. “Always With You” came from those conversations. Once again Danielle not only wanted, but needed, a song that would remind her and everyone that God is always with them. Knowing how difficult this loss was going to be she also wanted a reminder for herself and all others that those we lose, are also always with us. When she met with her co-writer / producer on April 18, 2016, they composed “Always With You” within an hour. Danielle’s grandmother was the first to hear the song before she lost her battle with cancer on April 29, 2016 which was Danielle’s 17th birthday. Always With You was released in September 2016 and was #1 on the Top 30  International Inspirational Christian Music in English from June 5th to June 27, 2017 (GT) (ICR).

Danielle’s latest song Breath was released on March 23, 2018. The song is dedicated to her Mom and all her fans, radio stations and everyone who has been involved in her music! She describes it as a song for those who lift you up. All you have to do is listen to her song Breath to understand that she is also talking about how her faith has played a strong role in her life. The video for Breath won the Carolina Music Video Award for best Gospel Video in 2018.

Danielle’s ultimate goal is to use her talents and life experiences to help others. While growing up in the great state of Maine, Danielle spent time volunteering with Big Brother’s Big Sisters and spoke against bullying. Danielle is also known for her love of animals and adopted five cats and a dog from the local humane society while growing up. After graduating from High School at age 17, Danielle opted for a change in scenery. Danielle headed to western North Carolina in the beautiful Blue Ridge Mountains where music and the arts are emphasized. There Danielle has continued to help others by participating in and joining the local committee for the Walk to End Alzheimer’s, by volunteering with Sonrise Outreach, helping those in need at Christmas and by recently adopting two new cats. Wanting to be closer to Nashville, Danielle moved to TN in September 2018 where she plans to continue her career goals of writing and recording songs; all the while, pursing a future career that combines her background in music and music business to hopefully continue to make a difference in the lives of others.
Here's all the ways that you can connect with Danielle & her music: