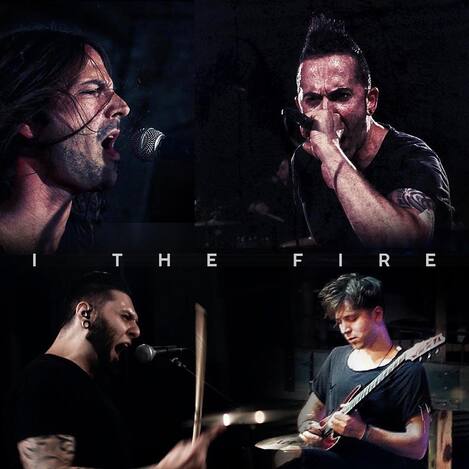 I The Fire stands for self empowerment: The fire to persevere by possessing the utmost confidence in yourself in order to succeed in life. Although the overall sound of the band is aggressive and intense the
message is one that is meant to be positive and upbeat. “I had hit a point in my life where I was surrounded by people and situations that were extremely negative and draining, which was killing my confidence and drive” says lead singer Joe Salvatore. This influenced a lot of the ideas for the songs on their debut album, in which Joe stated he was “catering to his ego” by allowing it to provoke this internal conflict. The heavy, yet melodic sound of the band draws from this realization and inspired the name of the album, “Disable The Ego” which was released independently on Sept. 5th 2017.
Early adopters describe the band’s sound as energetic hard rock that will resonate with fans of Linkin Park, Papa Roach, Breaking Benjamin and Five Finger Death Punch. The band also draws inspiration from more recent bands like Nothing More, Of Mice & Men and OTHERWISE . “Their new 12-song
release is a nice wake-up call that there are still new bands out there that have that classic hard rock edge,” said Jim Pasinksi in a recent review on JP’s Music Blog (JPsmusicblog.blogspot.com).

I The Fire’s home base is in New York’s Hudson Valley, where they recorded the songs for, “Disable The Ego.” The flame ignited when Joe Salvatore parted ways with his previous band, Sweet Cyanide, and began writing and recording solo. He states, “I needed an outlet and writing on guitar alone just wouldn’t suffice this time around.” Salvatore continues, “It was important for me to develop the confidence in myself to express my emotions, and although I never wanted to be a singer I knew that it was the only way for me to do it .” In The following two years it took to complete the album, Joe commissioned his most talented friends to contribute. I The Fire is lead singer Joe Salvatore, bassist Bobby Bello, drummer Randy Pasquarella, rhythm guitarist JJ Reed and lead guitarist Mikey Alfero.

“The songs were meant to convey that liberating feeling you get when you address any situation or person that has caused you pain throughout your life, including yourself, and hit it head on,” says Joe. And you get that sense with the edgier lyrical themes presented on the songs from ‘Disable The Ego.’ These themes range from Stereotyping on the song “Reckless” to cheating significant others in the song “Keeping Secrets.” From start to finish the album pounds you with anthemic, guitar driven relinquish. In the opening song “Bridges” the singer declares “the bridges that you burned already fell,” indicating that some personal ties are being severed. The eradication continues on the song “Timewaster” where the singer denounces “you’re such a drama queen you’re dead to me.”

There are also a few reflective moments on ‘Disable The Ego’ on which Salvatore comments “you can be your own worst enemy by allowing your negative thoughts to bring you down. The ego enjoys compounding and reinforcing that pain. You can’t let it do that to you.” This is prominent on the wistful ballad “Every Sun Casts a Shadow” where the motif is feeling guilty about being free spirited. As dreamy tremolo effects pan over the line “It feels like I’m a witness to the story of my life,” you can feel the singer yearning for something more when he asserts “I don’t know if I’m coming back but I’m leaving for a while.” The introspective moments on the album compliment the anger and frustration you feel coming through a lot of the songs to provide a sense of mental balance….a balance to show that all of our problems are self-inflicted and can be removed from our consciousness by “Disabling The Ego.” Salvatore cites the album closer, “Anthem” as his personal Anthem and the emotional turning of the tides for the album. “I know a lot of people can relate to Anthem because we all share that crippling self doubt that seems to emerge at times in our lives when we need to be strong and overcome any obstacles. I’ve hit a point in my life where I’ve come to the realization that I'm not my past and I can't predict my future, so I just need
to aim high and believe that I am destined for something great.”

I The Fire is truly destined for something great, and 2018 will be a busy year for the band. They will take to radio and tour in support of the album in depth starting spring of 2018.
​
Band Lineup:
Joe Salvatore (vocals)
Bobby Bello (bass)
JJ Reed (guitar)
Randy Pasquarella (drums)
Mikey Alfero (lead guitar)
​
Here are some of the ways that you can connect with I The Fire: