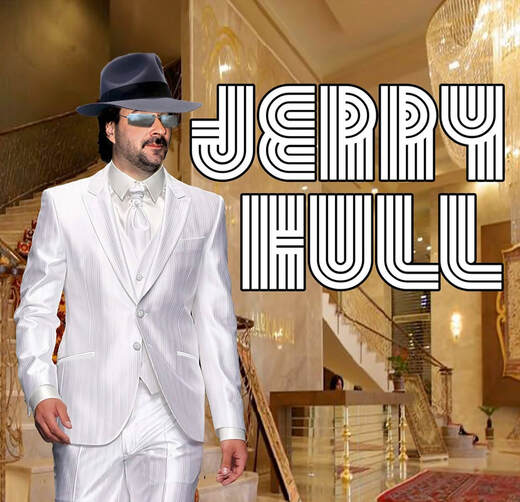 Jerry Hull is a singer, pianist, songwriter, and arranger,  from Memphis Tennessee-based in Hull UK. He has released 43 singles, 11 videos and 6 albums since April 2015 till now: debut, "Heaven Help Me" in July 2015 and second album, "Shadows Of  The Sun" in December 2015. A third album of 28 tracks, CHEROKEE MOON  released Aug 1st, 2016, and a fourth album, MADE IN MEMPHIS, released Dec.2016. His 5TH is a 15 track album, "CELEBRATE IN THE SUNSHINE", released August 26, 2017 and his newest 6th album, "STRANGE AFTERNOONS", released May 18, 2018. Presently, a 7th album is being produced and is due for release Nov-Dec 2018. His music covers many genres such as: Americana,  gospel, country, medieval, jazz, pop, rock, New Orleans sound, ragtime, orchestral, blues,  boogie woogie, The Memphis Sound, and romantic love ballads. Jerry has been playing piano for 42 years.

Music reviewers and fans have often said, Jerry’s style is similar to  Elton John, Billy Joel, Burt Bacharach and Todd Rundgren both musically  and vocally, but with his own original style emerging within these. His  writing, playing and vocal style is also impacted from being brought up  in the mid-south of the United States and most certainly from being  born and raised in Memphis, Tennessee, famous music mecca of the world.

He says, " I love mostly rock, blues, pop, jazz, and orchestral either  separately, mixed or matched or infused at most any level." All of his  own personal originals have one or more of these elements usually  bolstered with a hint of light or heavy contemporary, black or old  fashioned Christian and gospel/blues.  In his early years, Jerry grew up singing and playing piano in black  and white raced churches and choirs in and around the south and Memphis.  Often he would do sing solos at the piano at churches sometimes  accompanied by his father, an accomplished guitarist, and his four  sisters, a melodic quartet.

After 24 years (1975-1999) of living in and gigging from Memphis' Beale Street and night clubs and music spots around the area to playing piano in bands at parties and weddings in the Santa Monica, Hollywood, and Ventura areas of Los Angeles, all through the Midwest USA and in Toronto, Jerry settled in East Yorkshire,  England UK for the last 16 years since 2002. Certainly, life's  experiences mixed with his idyllic English countryside present  surroundings continue to serve as strong inspiration. Now having time to  reflect life,  his fresh newfound creativity seems endless and can  certainly be found in his style of writing recently. Jerry has never  been more prolific in his entire life as within the last mere 3 years  having produced in excess of 300 songs and he says, “They keep coming”!  Jerry Hull has been actively involved in music for almost half a  century.

Jerry enjoys incorporating into his music Bacharach tones surrounded by a Memphis blues foundation and colors of classical orchestral laced with hints of New Orleans ragtime. He says,"I  love to design my own arrangements and would never dream of creating a  group of songs in just one genre. “I love to write my own lyrics and of  course write my own melodies and harmonies." He says, "I am happy with and prefer to write my own material rather than cover someone else' s".  After all with such a fuel and drive for creativity to express yourself,  why would you want anything else!.

Here are some of the ways that you can connect with Jerry Hull: