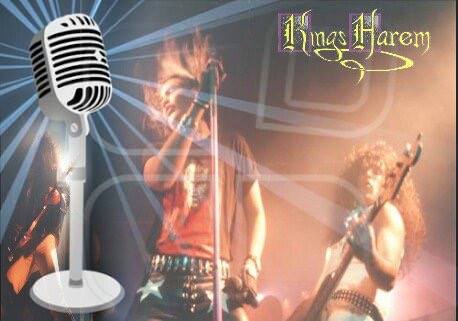 ABOUT US:
KINGS HAREM is an emerging hard rock band with a classic edge for todays Active Rock and Alternative Rock markets. Our music has uplifting energetic melodies fused with captivating vocals and lyrics. Our singer is BMG recording artist Ruben Gomez Kane,  an ex-Menudo pop star, who's personal Latin American following allows KINGS HAREM access to South American and Latino markets that reach globally. Coming from one of the most successful commercial pop acts in music history, he brings a unique polished style to our brand of new rock.

Our fans vary in age, culture and economics and all share the passion for social-site engagement that has evolved into a multinational footprint with Fan Clubs in several countries we are proud to be apart of. By embracing our diversity, we crossover musical genres too captivate, motivate and merge Rock, Pop & Metal flavors back to HOR mainstream. Kings Harem brings raw energy and excitement to our audience and delivers the message that music can transcend all boundaries.

As the word spreads throughout Europe and the America's, the bands songs are climbing celestial radio's request, rotational and DJ syndicated charts. Everyday more and more stations add our music to their formatted shows and capture our fans multi ethnic base. On their most recent live radio interview, the band drew 100k Arbitron listeners as they watched over 100 county flags light up the screens from Asia, Europe, North & South America, 'we realized how music can bring people together.' After a long separation of personal careers, KINGS HAREM has reunited to produce their brand of music that rekindles a spirited enthusiasm of what it means to be in a rock band.

KINGS HAREM is:
RUBEN GOMEZ - Lead Vocals and Backing Vocals -  Already an International recording star from Menudo, with a long touring discography joined the band 1991. The John Crisci meet Ruben at a local Jersey  7/11 getting a cup of coffee. Not knowing who he was, he asked if he was a singer. He said yes and he invited him to sing at a gig that weekend. ...and that’s how they meet Ruben. They've remained friends every since that day. Ruben's solo career has broadened his musical horizon that has expanded his personal facebook fan base to 75k.

JOHN CRISCI - Lead Guitar and Backing Vocals - A Music Major graduate of Wiilliam Paterson University, NJ, with 10 years of jingle sessions, film sound tracks, producing and engineering. "As a band, we lived for the stage performance." Playing with all the Jersey greats in past bands, such as Ray Gillan of Bandlands, it was a close circle of friendships, musicianship and down right good fun!
JERRY CAPRI - Bass Guitar and Backing Vocals - A Bassist who plays his instrument like a lead guitar with the stage presence of a front man, what a combo. Right out of college radio, already a DJ personality, his charisma captivates the audience to make you wonder what is he going to do next? Never a dull moment...

JON ORTH - Drums, Percussion and Backing Vocals - You’d swear he had 4 legs and hands. His understanding of rhythm counterpoint and song arrangement really held us together. A well rounded session player, knew any style and how to compliment the song. A true showman and friend, plus he,swings a mean hammer.
​
JOHN SEPUT - Keyboards and Backing Vocals - A technical wizard and also a Music Major graduate of Wiilliam Paterson University. John knew how to pad and embellish the songs. From the tonal changes to complicated chord passages, he had it down. He also had the Rack of GOD! You’d swear the heavens were opening up when he laid into those keys. He could peal the paper off venue walls with one key stroke and make it rain on command! Once he took the stage, you knew KINGS HAREM was law.

ADDITIONAL ARTIST HISTORY:
Originally from New Jersey, growing up in the mid 80's, we saw the rise of shopping malls and hair bands. It was a melting pot of music, musicians and fashion. To either be in a band or be seen hanging out with a band was the coolest thing ever. On the local scene rising up in the shadows of Bon Jovi, Skid Row and Trixter alike was KINGS HAREM. Featured on WSOU & WDHA, the bands notoriety took off at the start of the 90's. Known for their high energetic stage performances, the band thrived on giving the audience a show remember. Infamous for their after show parties, the band would sometimes make 5 - 10 lbs. of pasta feeding the crew and guests. The band members mostly Italian, were all home grown boys having the time of their lives.

In the spring of 88' founding members John Crisci, guitarist and Jerry Capri, bassist, were both performing on the Jersey club circuit in various bands. Like most musicians they were involved in projects that often developed into something else. John fresh out of music college, meet Jerry from an ad in a paper called the 'Aquarian'. The two personalities hit it off to seek out a drummer to jam with. Performing at a local club doing cover tunes was drummer, Jon Orth. The following jam sessions were joined by Jon's closest friend, keyboardist, John Seput.

The nucleus of Kings Harem was formed from those jam sessions with John Crisci assuming the lead vocals as the writing progressed. Performing gigs on the local club circuit to work out material and fine tune the show, the band realized it needed a front man to spark up the live performance engine. One night after passing out band flyers on car windshields promoting a gig, John Crisci stopped in a 7/11 coffee shop. There he meets Ruben Gomez at the coffee machine. Ruben had just left the pop band, "Menudo" and was looking for a rock project. Ruben was invited to sing at the next gig covering a Bad Company song, 'Rock Steady' and the rest was history. The energy of that performance was so cool we knew we had something. Captivating vocals, blazing guitars hooks and high energetic performances. Follow us and obtain the "All Access Pass".
​
Here are some of the ways that you can connect with Kings Harem: