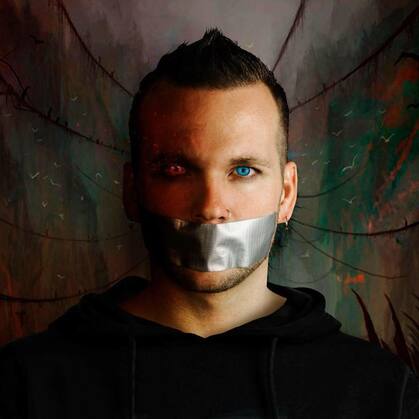 Hailing from Cincinnati, Ohio is the American rock artist, producer, songwriter, musician, and multi-instrumentalist known as "Mick Blankenship". Mick recently teamed up with producer John Moyer (Bassist of multi-platinum rock band Disturbed) to record his first full length solo album titled: “Crown of Apathy”. Using low and heavy guitar riffs, huge vocals, and hard hitting drums, Blankenship ties it all together with lyrics that are completely relevant to his past struggle and todays culture. The album is packed with raw emotion and relatable to all walks of life. The live performances are undeniable and has an energy like no other. The album even features Guns N Roses guitarist Ron "Bumblefoot" Thal The first single (Transcend the Machine) was released worldwide on 4.10.2017 and has been featured on multiple FM rock stations locally and internationally. Mick’s Full Length Album “Crown of Apathy” was released world wide on 2.24.2018
​
Here are some of the ways that you can connect with Mick Blankenship: