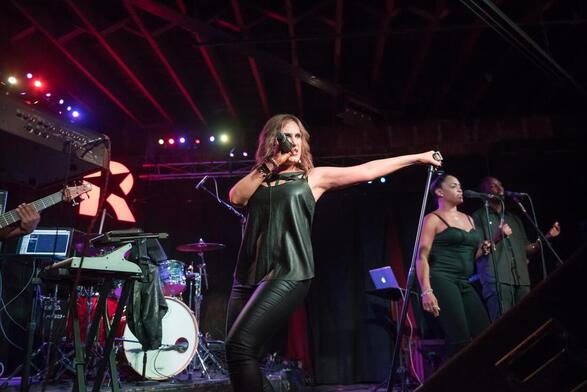 ​Known for her bold voice and unique style of electronic, dance, pop, and R&B, Nicole has loved dance music ever since she could remember. As a teenager, she idolized all the great artists like Donna Summer, Madonna, and Tina Turner, and often sang along to their records.
Nicole’s love for singing and performing began when she was three years old.  Her passion for music led her to take voice and piano lessons, and by the age of 13 she was already writing, and recording dance tracks.

In the early 80s, Nicole's talent soon caught the attention of music producers and she was offered a record deal. The deal unfortunately never got made, but she was determined not to let it stop her from pursuing a career in music.

Nicole went on to graduate with a degree in Theater and Communications from NYU Tisch School of the Arts. After college, Nicole began performing in musical theater productions, cabarets, off-Broadway plays, and lending her voice to jingle commercials and working as a voice over artist. It seemed like Nicole was destined to be a singer, but life took a different turn when she entered into the family business, and her dreams of singing fell by the wayside.

The next event would change her life forever.

In 2009, Nicole was misdiagnosed and then re- diagnosed with Breast Cancer, which stopped her life in its tracks.
She underwent a double mastectomy and eight courses of chemotherapy.

Facing her mortality made her realize she didn’t want to waste anymore of life’s precious time begging the question, "how do I want to spend the rest of my life?"

This life  altering event had a profound effect on her. After deep soul searching and self reflection, Nicole re-evaluated her life and realized one of biggest regrets she had was not pursuing her singing career. While Recovering from a double mastectomy, Nicole promised herself she would return  to  music as soon as she finished chemotherapy.

She decided to go back into the studio to start writing, recording, and performing again.

In 2013, Nicole started her own band and began performing at iconic East Coast venues such as The Saint, The Bitter End, Revolution, and Harlem Nights.

Nicole released her first single “Higher than Heaven” in 2014, a song about coming back from tragedy.
The song was picked up by Music Lov3rz Independent Radio and got more than 70K streams and was, featured in Music Lov3rz Magazine, in an article which was released to their one million followers online, and received glowing reviews from critics at The Ark of Music and Stereo Stickman.

Presently, Nicole is proud to announce that she has signed her first Independent Record Deal with Label 418  music which Billboard ranked as the No. 1 Independent Dance and Club Imprint Label.

She is now excited to RELEASE HER INSPRIATIONAL SONG “HIGHER THAN HEAVEN- THE REMIXES” remixed by some of the music industry’s top DJs and producers including Grammy Winner Dave Aude,  Grammy Award nominated Artist/Producer, DJ StoneBridge,  DJ Kue,  Remixer Of The Year for “I Heart Radio”, DJ Mr. Mig, and International Billboard Chart topping DJ/Producers Serbsican.

Nicole’s mission is to continue using her story, message, and music to inspire people everywhere to live their dreams and never give up.

You can find Nicole at NICOLEMARKSON.COM, and on all social media platforms.

Here are some of the ways that you can connect with Nicole Markson: