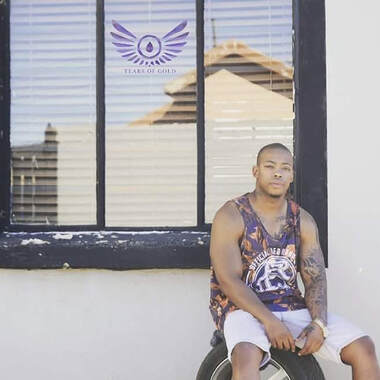 Lunga Sithole aka Rytious was born 2nd of January 1988,He was raised in Umlazi N-section in Durban Kwa Zulu Natal.He was given the name “Rytious” by his dentist who looked up the meaning of his name Lunga which means Righteousness but Rytious changed the spelling to mean yin and yen,a balance between good and bad.

Rytious then started rapping at the age of 12, he, s inspiration being life.
The conditions and the environment in which he grew up in inspired him to put his thoughts and feelings to paper and write lyrics to the best music he can possibly make.

Rytious does not only have music on his mind.
Rytious is currently the owner of a company called Tears Of Gold Pty Ltd,
He is a business that tackles many fields as he can handle.

Rytious previously joined a group in Cape Town called “Q.O.S-Question Of Style” where the audience showed a lot of love and support for their music and style. This is also where he was referred to Lungelo from TS records who he worked with on a 6 track demo.

CAREER BUILD UP IN JOHANNESBURG!

Rytious then moved to Johannesburg where he decided to start working on he, s 1st album. During his stay with Lungelo, Rytious was then given the opportunity to work with “General” from Chiskop where he was featured on his first single from the album “Ngifuna Imali Yami”.Which made the number 1 spot in the Yfm Hot 9 at 9 Kwaito countdown.

Rytious then left Lungelo to work with Midrand producer “Metabolism” on 2 tracks called “Get Ya Grind On” and “Never leave”. The music video for “Get Your Grind” has been shot and is still circulating on the internet, it also made its debut on Channel O in 2010.

While building his life in Johannesburg and making a name for himself in the music industry, he began working with well known South African producer Dome on his latest album called “Tears of Gold”.

He then had the opportunity to meet and be featured on Gwyza’s (from the TKzee family) song "Abathakathi" On Gwyza, s recent upcoming album.

On his latest album "Tears Of Gold" Rytious worked with Dome, one of the best hip hop producers in South Africa. In it, he features artists like Tshepo Gimboss Mokou (former 985 member), Kagiso Kage Motlabane (also former 985member) and Ethan Div@bwoi Ntuli.

His first single that has been released from his latest album ‘Tears Of Gold’ is ‘Makube Njalo’ featuring Kage produced by Dome.

The single is currently being played on Yfm 99.2,Metro Fm,Phaphala fm,Vow fm 90.5fm and more,the music video for “Makube Njalo has been shot & has been circulating on Channel O  including it making waves via the Internet,the music video is produced by Themba Lovemore edited at Bomba Productions.

Rytious also released a song called System ft Gimboss & Kage with Dineo Ranaka on the Remix as a teaser for the radiostations,System made the top 10 on its first day on radio on Vow FM 90.5fm,which was very impressive & made a lot of circulation on 5fm,s playlist.

Rytious has been blessed to meet and work with the amazing talent, he has a aim not only to be known locally, but to make his mark on the international market as well. With the right strategy, team and determination working towards that goal will be a reality.

“Viva Africa”Team Tswara ft Benni McCarthy produced By Dome was the 1st released single, which was endorsed by the 2013 CAF Tournament held in South Africa, this song made worldwide news, it played on international & local radiostations & also got Rytious to be on the supersport channel to promote the song in a message to bring Africa closer together as a continent.

“Amabhabhaka” Team Tswara featuring Benni McCarthy produced by Dome is the second song that was released, which debuted on radio stations such as Kaya FM, Yfm and more.
This song was made in celebration of Benni McCarthy joining the Orlando Pirates Soccer Team.
Rytious recently released a HIT BANGER called “Say So” featuring Soweto rapper Kay E produced by Mollen & Dj Face!

Here are some of the ways that you can connect with Rytious: