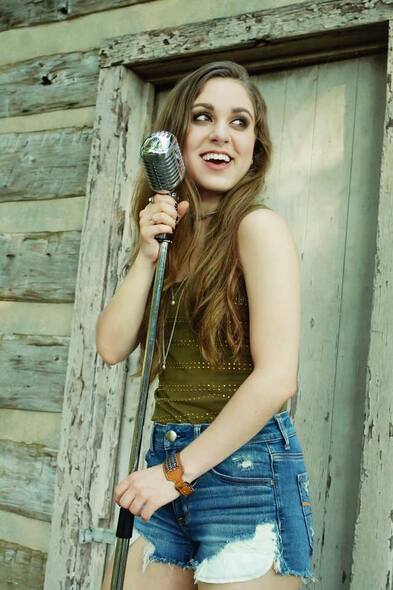 In both miles and metaphors, a 12-hour drive from Douglassville, Pennsylvania to Nashville is a considerable distance. With her blossoming career as an ascending artist, it is an inspiring journey that Stephanie Grace knows well.

A songwriter with something essential to say, a gifted singer and a charismatic live performer who has opened shows for platinum artists like Taylor Swift, Scotty McCreery, John Michael Montgomery, Josh Turner, and The Charlie Daniels Band: Stephanie Grace is dedicated to country music. “In my mind, Nashville is the heart of all music,” she says. “It’s overwhelming, but in a good way.

”Now 21, and already a veteran of national radio promotional tours and imposing concert stages, it is difficult to imagine that Stephanie could be overwhelmed by anything. “It’s all an act!” she laughs. “Growing up, I never had confidence. I was super awkward. Singing brought me out of that, but to this day I still get nervous before I sing. Then the second the song starts it’s like, ‘I’ve got this.’ It’s a drastic change. I get onstage and this explosion occurs.”

On her frequent trips to Nashville, Stephanie concentrates on writing and recording. Her eponymous EP debut established the creative identity that her second EP, Life’s Okay, showcases with world-class musicians and inspired production tailored to her rich, expressive voice. Significantly, she co-wrote all but one of the tracks on her latest release and she often works with her Nashville collaborators long distance via Skype.

Growing up in a small town of less than 500 inhabitants, country music came naturally as she connected through artists like Shania Twain, Faith Hill and Martina McBride. “A lot of people my age would have never liked country music,” Stephanie recalls. “I was not a cool kid. Then in junior high everyone began listening.”

Since graduating high school in June of 2015, Stephanie is taking music on as her full-time career.

Her single “Loser,” and its accompanying video, connects Stephanie to a cause that she considers vital: the prevention of bullying. She remembers the song’s inspiration. “In school one day I sat with a group of unpopular students and had a really good time. But people asked me, ‘Why did you sit with the loser table?’ This inspired the song and inspired me to visit schools: To not be a bystander, to step up and be a friend.”

In many ways, Stephanie Grace’s backstory seems familiar: a young girl with dreams of stardom, standing in front of a mirror with a hairbrush for a microphone. What is noteworthy is how readily and realistically she found outlets for her aspirations through local shows at restaurants, fairs and carnivals and regional talent shows. Although she first tried writing songs at age eight, she says that it took her until she was 10 to “get the words flowing.”
Her accomplishments are impressive, her future is unbounded and Stephanie Grace has no fallback position. “Outside people will sometimes ask me, ‘What is your backup plan?’ I don’t have one. I’m truly passionate. I am devoting every ounce of energy to making this happen.”
​
Here are some of the ways that you can connect with Stephanie Grace: