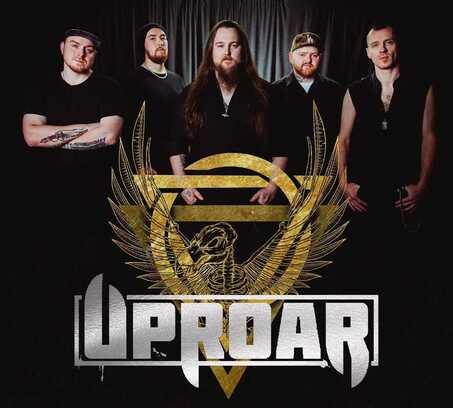 Forged from the streets of Glasgow, Scotland in 2015, Uproar started life as a few jam sessions between like minded musicians.  After a 'no tolerance for imperfection' attitude and several line up changes they arrived at their current line up consisting of:

Seperately the band have shared stages and tours with the likes of Limp bizkit, Alterbridge and Skindred.  Together, the band were able to draw on thier musical backgrounds and experience to create a blend of hard rock, nu metal and stadium worthy melodies,  inspired by the likes of  Sevendust, Breaking benjamin and shinedown, to name a few.

Desperate to share their love of music with the world the band stepped into the studio in early 2017 to record their first release 'Fable,Vol.1'.
Consisting of hard hitting, in your face tracks like 'wonderland' and title track 'Fable' , along with the sing along anthem 'Forever burning' the E.P was released in December 2017.

With only a few gigs under their belt as Uproar, the band have still made a lasting impression on those who have seen them live.

"Uproar I can safely state for the record they will play Bloodstock, they will play Download, in fact they will play wherever they want as they are that good. I cannot wait to see this exciting band again"
​
www.jacemedia.co.uk
​
"Forever burning is a ballad, of sorts, without actually being a ballad. If the definition of ballad is “the slow one that punches you in the guts”, then it’s a ballad, a true showstopper."
​
www.devilsgatemedia.com

Here are some of the ways that you can connect with Uproar: