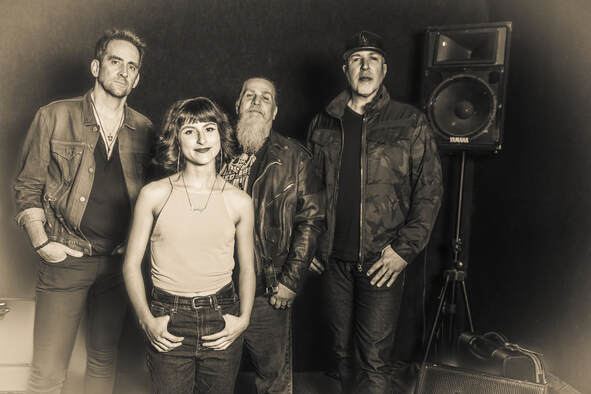 YYNOT ®was the coming together of award winning-Grammy ballot nominated Guitarist/Songwriter/Producer Billy Alexander (John Waite, FEEL, Ron Blair-Tom Petty) and Florida based virtuoso, bassist Tim Starace. After seeing Bassist Tim Starace post videos of his mind-blowing and accurate Rush bass covers, Alexander approached Starace about forming an online collaboration by creating videos of Rush classics. The videos have grown in popularity and have gained hundreds of thousands of views. Their videos gaining over 2 million views overall on Facebook and YouTube.

Alexander recruited then 19 year old Rocky Kuner after seeing her perform a jaw-dropping version of Deep Purple’s “Highway Star” while she was still in highschool!

Drummer Joel Stevenett came into the fold when a member of a Rush online group suggested he and the band work together. After seeing the world -class drummer perform a Rush drum medley on YouTube it was obvious this was a perfect match!

‘YYNOT’ pride themselves on perfectly accurate representations of the Rush catalog as well as a penchant for releasing “Rush-esque” original material that stands up against some of the strongest progressive/hard rock music out there.

Ian Grandy: Rush's first roadie, soundman/head of concert security says "I think YYNOT are a dynamic and talented band...wishing them a great future"

Mary Jo Plews: RushCon says "YYNOT are an amazing group of talented artists that are dynamic, precise and intense. They capture the passion and essence of Rush in hitter live shows and in their original music."
​
YYNOT’s live shows are designed to take the fans on a journey back in time as well as deliver a fresh new spark and bring back the power and majesty of hard rock that the fans have an undeniable hunger for.

Here are some of the ways that you can connect with YYNOT: